SmartStarters Come Together for 16 Days of Activism! 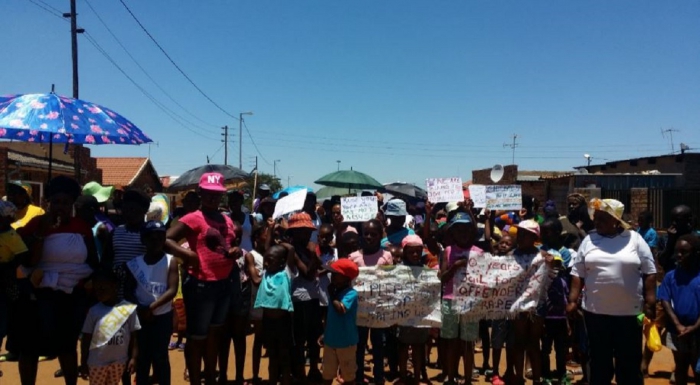 Together We Can Stop Abuse! Respect Us! Raise Your Voice and Say No to Abuse!

These are just some of the messages echoed on placards as our SmartStarters and their little learners marched through the streets of Orange Farm on the 29th of November 2016 in support of 16 Days of Activism against Woman and Child Abuse.

Five of our clubs within the Orange Farm area came together in what ended up being an important moment in our SmartStart history. This event not only encouraged the community to join forces, but also reflected the spirit of growth, independence and initiative within our SmartStarters.

The day kicked off with a buzz as everyone gathered together to prepare for the awareness walk. Local SAPS officers arrived to a full church of children, community members, SmartStarters and media all ready to play their part. Led by two law officials, everyone took to the streets singing, chanting and proudly holding up their banners; grabbing the attention of those we passed. It was an emotional moment that left a few grown men shedding a tear.

Some members of the community even decided to join in on the walk and by the end, what started as a few members singing was now a full-on community choir with different voices coming together.

“I never imagined someone like me would be able to do something so big,” said Roseline Kgala, one of the SmartStarters responsible for putting the event together.

Following the walk, everyone gathered back in the church, including those who had joined in. A talk was given by the local police on the importance of reporting crimes and abuse, and of knowing that the law is there to protect our women and children. Other speakers included one of our SmartStart caregivers, Dorcas, as well as club coach, Tania Sane. Dorcas spoke proudly about the improvements she’s seen in her child since joining SmartStart, while Tania briefly explained the SmartStart model and how it further inspires entrepreneurship within the community.

The day also included a showcase of our Get-Set-Go play show which not only entertained the audience, but also answered questions about the impact and importance of early learning in a child’s life.

Well done to our SmartStarters for taking the initiative to put this event together. You have shown that nothing is impossible when you heart is in the right place.  We applaud you!