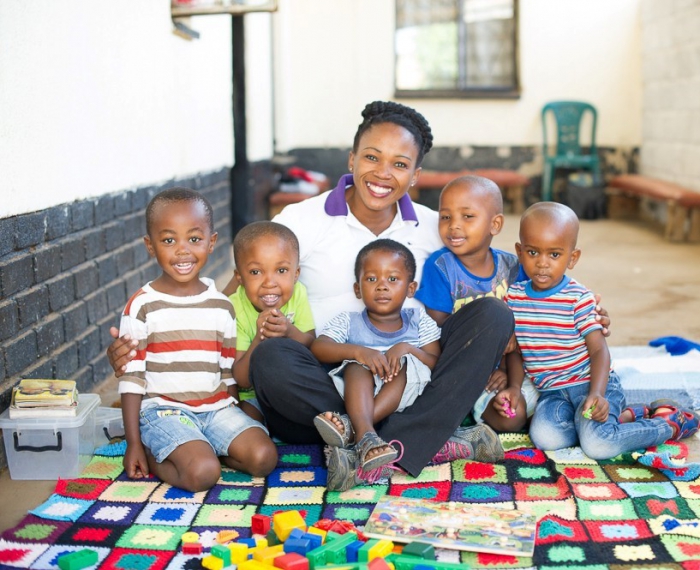 If you ask a young entrepreneur about their very first office, it’s not uncommon to hear the answers ‘my garage’ or ‘my bedroom’. For Luleka Nkayi though, it was her 9-year-old son’s bedroom. And it wasn’t her first office, but her first classroom.

Luleka is one of our SmartStarters from Orange Farm. From a young age, she always loved being around children. But it wasn’t until she came across SmartStart that she realised it was her calling to work full-time with them.

A 31-year-old single mother, Luleka had been working in the corporate world as a receptionist and call centre agent. After graduating from high school in Johannesburg, she took a series of short courses in marketing and financial management. While she enjoyed the work, it wasn’t what she was truly passionate about.

It was as she was pursuing new career options at Harambee, a local employment accelerator, that Luleka heard about SmartStart. It immediately piqued her interest and she grabbed the opportunity with both hands.

After attending and completing the five-day start-up training, Luleka opened her SmartStart playgroup in September 2015. She was quick to bring six children into her playgroup, as her community remembered her as a young woman who loved being around children.

“I was happy when Luleka said she will start a playgourp,” recalls Elizabeth Zwane, the grandmother of four-year-old Sipho Zwane who attends the playgroup. Sipho had never attended any kind of early learning before. Instead, he was biding his time at home playing with his cars and watching television while his mother worked full-time.

“If a child is just sitting at home, a lot of things pass them by. At home, we just gave him food, bath him and let him play. There is nothing that the child is learning, so I was happy because if he goes to a playgroup, he will be smart.”

The community love Luleka’s playgroup and she receives a lot of support from parents. In addition to paying a small fee, parents also help by providing fruits and vegetables. She also has a waiting list full of parents wanting to enrol their children.

“I am happy for this playgroup as well,” says Ana Moloi, the grandmother of four-year-old Bonga, who lost his mother in 2013. “It has fully satisfied me. It’s not like other crèches. It’s clean and their teacher is also right for the kids. When I bring Bonga here, he gets excited and looks forward to going.”

In January 2017, Luleka moved out of her son’s bedroom and into a bigger venue. She will also be bringing in two new SmartStart trained assistants, so that she can grow her playgroup from eight to 18 children.

Luleka also has plans to open more playgroups, including one in her home town in the Eastern Cape.

“This has been a wonderful learning journey for me. I am so grateful for all the support I have received. Since joining SmartStart, I have never looked back,” she says.