‘League of Stars’ Competition Kick off 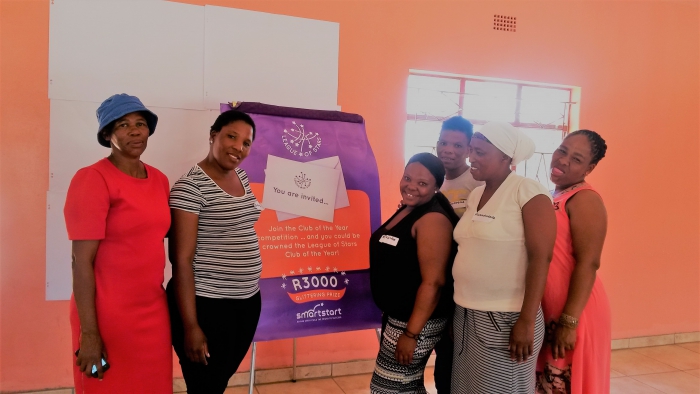 What makes a successful SmartStart club?

This is a question we recently asked all our club team leaders. They agreed that good clubs:

Although members are aware and understand what is required of them as SmartStarters, they often let some activities fall back, or don’t give them enough priority, for various reasons.

Introducing the League of Stars

To encourage teamwork and increase excellence in these five areas, we have formed a new club league competition. The objective of the league is to encourage a support network, where clubs can collaborate, solve problems and socialise constructively.

To top it off, there is also a R3000.00 cash prize up for grabs for each member in the winning club.

How does the league work?

Each of the five areas above has been given a measurement value. Every month, clubs need to score their performance in each area, following the guidelines provided to them. We will then total all of their five scores to get an overall performance rank, which will give them a position in the league. At the end of the league season in November 2017, the club with the highest overall score will be crowned the “Club of The Year”.

Playing by the rules

To promote healthy competition, where all clubs stand an equal and fair chance of winning, the competition rules are as follows:

The league is designed to help all our members enjoy the benefits of being part of a club. Aside from being part of a support network, we will also be providing incentives throughout the league season, which will be awarded to acknowledge improvement and excellent achievement on a regular basis.

To date, six successful launches of the league, and one ‘mop-up’ launch, have taken place across the North West and Gauteng, with 36 eligible clubs taking part. There are currently four leagues in the two regions and they all have an average of 10 clubs competing for the grand prize.

The overall league concept has been well received and the club role has been clarified. SmartStarters now understand that successful clubs are those where members feel a sense of belonging, understand the importance of their active involvement, and are deeply committed to helping their club achieving its goals.

We can expect to hear a whole lot more from our clubs throughout the year, and we’ll be sharing updates through our various communication channels. Be sure to keep a look out for them!